Red Ginseng (Panax Ginseng Meyer) has been known for millennia for its ability to increase the resistance of the human body to psycho-physical stress.
It also seems to be an effective nutritional supplement in power sports but, above all, in resistance (cycling, skating, swimming, cross-country skiing, etc.).

Red Ginseng belongs to the category of Adaptogenic Plants, whose features are studied only for a few decades, that is, since the Soviet Defense Ministry has been searching for substances that increase the resistance of its soldiers during World War II. The researchers realized that some plants (few) had positive effects not on individual organs but on the entire human body. Adaptogenic plants are therefore naturally occurring metabolic regulators that affect almost all systems of the human body by promoting its homeostasis and increasing fatigue resistance.

The term adaptogen was coined by Soviet pharmacologist Nikolai Lazerev in 1947.
He gave the following definition [1]:

“ An agent that allows the body to counter adverse situations of a physical, chemical or biological nature by increasing non-specific resistance to these stresses and thus allowing the body to ‘adapt’ to stressful circumstances “

An adaptogen, to be such, must have the following requirements:

The effects of adaptive plants on sports performances have been studied for a few decades and first results are available, such as personal trainer Alvaro Molinos Domene, member of the Spanish Olympic Committee, in 2013 published a review of the first scientific studies on [ 3] that emphasizes the purpose of these researches: to increase the resistance of athletes to fatigue by alternative means to conventional anabolic stimulants which have serious side effects. The difference between adaptogens and stimulants (drugs) is that adaptogens stimulate the body’s metabolic systems and keep them active for a long time, while chemical stimulants shorten their effect and require further administration to maintain high performance (see Fig. .1).

Many adaptogens have been studied to improve fatigue resistance (eg garlic and green tea), but only a few have been shown to be effective in physically proven physical recovery (after an intense effort).

The main adaptogens of which have been shown to be effective are Rhodiola Rosea, Eleutherococcus senticosus (or Siberian Ginseng), Schizandra chinensis and Panax Ginseng. Specifically, the latter have different types but the main ones are two: Panax Ginseng Quinquefolius (American) and Panax Ginseng C.A. Meyer (Korean); They differ for the different content of ginsenosides [5] and, in particular, of the higher Rg1 (stimulant) ginsenoside present in Korean Red Ginseng and Rb1 (soothing) in greater amounts in Ginseng Quinquefolius. Beyond this partial and simplified description, there are many other ginsenosides in the two types of Ginseng that contrast various human diseases (diabetes, tumors, multiple sclerosis, etc.). Table 4 shows the comparison of effects on the human organism of adaptants and stimulants (drugs). 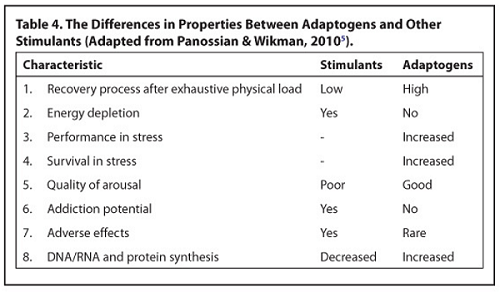 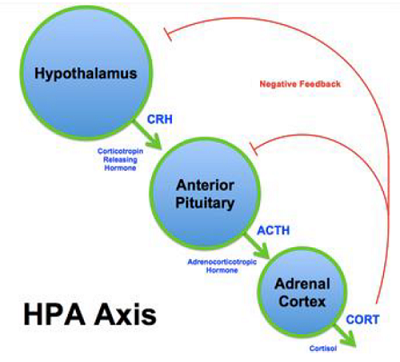 The operating principle of Red Ginseng (but more generally of the adaptogen) is shown in the figure below, which presents the hypothalamic-pituitary-adrenal (HPA) axis which governs the regulation of the endocrine system.

The metabolic process, in the case of Red Ginseng, is part of the ginsenosides contained in it that stimulate the hypothalamus, otherwise called the ‘visceral brain’, which activates the release of the CRH (corticotropin) hormone in the pituitary gland (pituitary gland). Hypophysis, in turn, releases ACTH (adrenocorticotropic) hormone into the adrenal cortex (Adrenal Cortex).

Lastly, by the release of cortisol, otherwise known as the ‘stress hormone’, regulates glucose, protein and lipid metabolism, water balance and electrolytes, blood pressure regulation, Melanocyte activity (which governs tanning), sex hormones in man and woman and many other important processes.

Negative feedback is shown in the figure by the red lines that show the presence of a double negative feedback controlled by cortisol that inhibits both the hypothalamus and the pituitary when it takes too high levels.

In summary, in a healthy subject, there is an increase in ACTH when cortisol is low and so on.

It is advisable to adjust your cortisol levels in stressful and competitive situations because it is known that they cause the following disorders:

It has generally been found that Korean Red Ginseng modulates stress response and reduces performance anxiety. It is believed that it acts in the muscles of athletes because of its ability to favor the release of creatine [7]. Here are some scientific studies that demonstrate the effectiveness of sports performance.

A study [9] carried out during the Bejing Olympic Games in 2008 on 161 athletes from the Korean National team showed that 58% of them made good use of Oriental sports supplements (Mix of Oriental Medicine , Red Ginseng, Korean Ginseng), especially to speed up physical recovery after races.

Finally, an article [11] mentions several studies that show positive results of panax ginseng both in aerobic and anaerobic activities.

A note from the University of Michigan [12] aimed at athletes suggests giving athletes a daily dose of 2gr daily for 8-12 weeks. It is advisable not to exceed these doses to avoid side effects such as hypertension, insomnia, diarrhea, nervousness, and so on.

Sign up to receive promotions and news on Persalute!

We use cookies to make sure you can have the best experience on our site. If you continue to use this site we will assume that you are happy with it.OkNoRead more
Go to Top